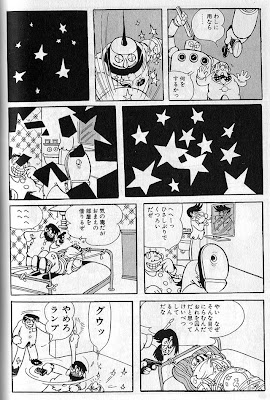 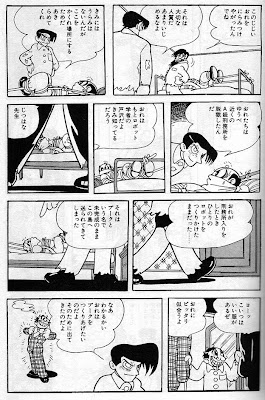 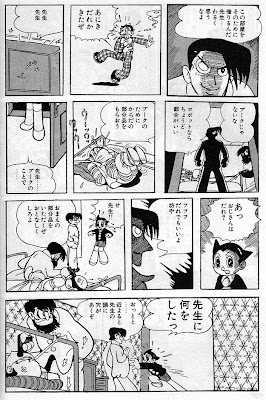 The reason why I have not been blogging more often lately is because I'm currently working on a translation - yup, that's what brings in the bacon. It so happens that the book I'm translating is a biography of one of my favourite comics artists, Japanese grandmaster of manga, Osamu Tezuka. Now, I have studied Tezuka's work already in the past (I wrote a couple of papers on him while a mature student of Japanese at university a few years ago) and one thing that always struck me was the love/hate relationship a lot of his characters had towards their fathers or father figures. Nothing exemplifies Tezuka's ambiguous - to says the least - attitude towards father figures like his character of Higeoyaji.
Higeoyaji ("Old Man Moustache", or Dr.Walrus in the Astro Boy TV series) is a buoyant, energetic 40 or 50-something that Tezuka fashioned after a caricature a classmate had done of his own grandfather. He is usually cast as a detective (whose "real" name is Shunsaku Ban) and even in Astro Boy, where he is the young hero's teacher, he often acts more like a gumshoe than an educator. What is fascinating - to me - about this character is the way Tezuka has him mistreated throughout his career, from an early appearance in an unpublished version of the graphic novel Lost World (circa 1945) where he is captured by bad guys, tied up and beaten to a pulp, to more recent ones like in contemporary thriller MW (1976-78) where he is captured by the bad guys, tortured, pursued by a ferocious dog who catches up to him and bites off his balls. Well, maybe not (we never do see what the dog bites) but it sure looks bad!
The pages I have chosen this time are from a 1958 Astro Boy story the Japanese title of which translates as "Cruciform Island" (I have no idea what the title for it was in the English-language edition). Bad guys capture Higeoyaji to get at Astro and the Old Man with the Moustache spends a goodly portion of the episode tied up (and when he does get free, he has to fight his way through various perils, he gets stabbed in the arm and even loses his pants). I must say Osamu Tezuka has a really fiendish way of having him tied up on that bed. I think he really had it in for ol' Shunsaku Ban. And who can blame him? When you have such a hot daddy character, of course you're going to put him through the wringer!
Posted by Jeryn at 17:43 No comments: