Joe in the Corner

Lemme tell ya about my pal Joe. Joe is this chubby little guy in his late fifties or early sixties – he would never admit to a day over 45, though. We met online and started chatting. I don’t know why I bothered with him. I mean, I’m the kind of guy who likes to do things for real and he struck me at once as the kind of flake who fantasizes a lot but never actually does anything about making his fantasies come true. Still, I humored the little fucker. Heck, here was a guy almost twenty years older than me and obviously still a virgin S-and-M-wise, but so very fascinated by it.
Boy, was he intrigued! When we started chatting online, he kept asking me so many questions I thought it would be easier to just meet over a beer and talk. I was pleasantly surprised when he turned up at our first encounter – we had agreed to meet at a local bar. His type very seldom turns up for anything! But turn up he did, and we started seeing each other once or twice a week. And I must admit he had a hot little body – about 5’1”, very dark hair that was just starting to turn grey, a very furry chest, from what I could see when his shirt was open. But that was all I could see. This idiot was always fully clothed. All he seemed interested in was talk, talk, talk. He wanted to know everything I did as a Master. He was a glutton for every kind of detail I could give him.
- So what did you do to him, then? Did you fuck him? Was he still wearing the jock strap? And blah blah blah, yadda yadda yadda.

As I started to slap Joe’s chubby little bottom, I thought that this had definitely been worth waiting for. Joe probably thought so too.
Posted by Jeryn at 22:36 No comments:

Colonel Strong All Packed and Ready to Go 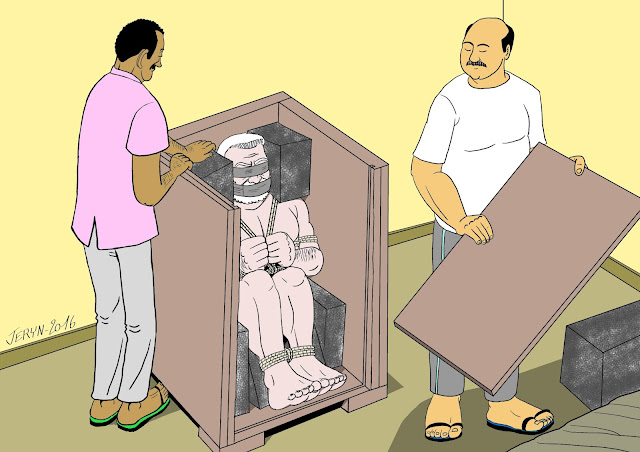 Waiting in the Guest Room 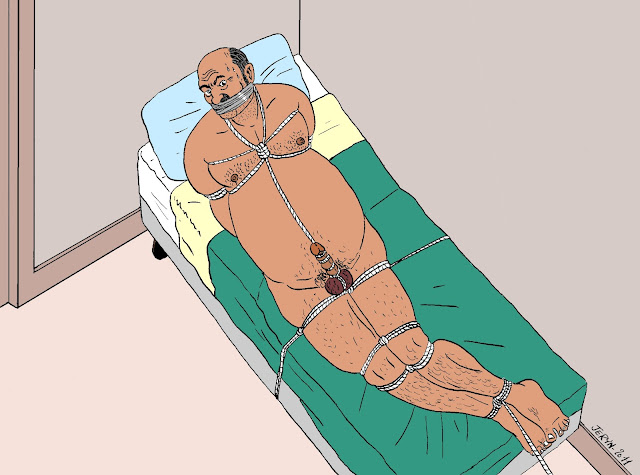 This one was drawn five years ago but I just re-touched and coloured it. That's when I decided that the "guest" would be Indian. I wasn't sure where he was from when I drew him. I don't know much more about this picture. I think the "guest" was maybe a repairman who came to this house to do some repairs and at some point, was given a spiked drink that put him to sleep... and when he woke up, he found himself in this weird situation. What's worse is the tying up of his cock and balls has actually given him a hard-on. He is waiting for somebody to come with a mixture of fear and anticipation. What are those people going to do to him? They are very rich and he is from a lower caste, so it doesn't really matter what happens to him, poor guy.
Posted by Jeryn at 15:56 No comments: