On this page, I will post a few drawings that are very, very old. So this is not bondage art showing very old males (although sometimes…) but rather male bondage art that is very old. I started drawing naked men on a regular basis when I was about 16. The following drawings must have been made when I was 17 or 18. 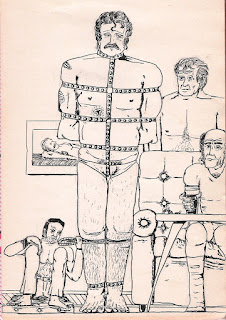 Now keep in mind that at the time, I didn't know a lot about anatomy. So if the legs look stumpy and cylindrical it's just that I didn't know any better. 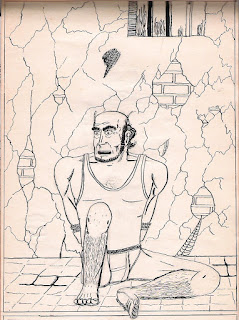 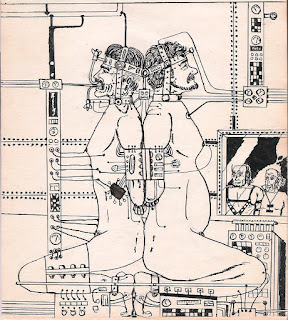 These two drawings are part of a projected series that would have told an actual story. I was using for the main protagonist (top drawing) a character from a comic that I had liked as a child. In fact, if anybody thinks that slash fiction and comics are a recent thing, then they are very, very wrong. I was pairing this character with another character from the same comic (featured next to him in the second picture) and that was in the 1970s. By then I had also seen the work of classic female bondage artists from the 1950s Stanton, Jim and Eneg, hence the techno-metal bondage in the lower picture.