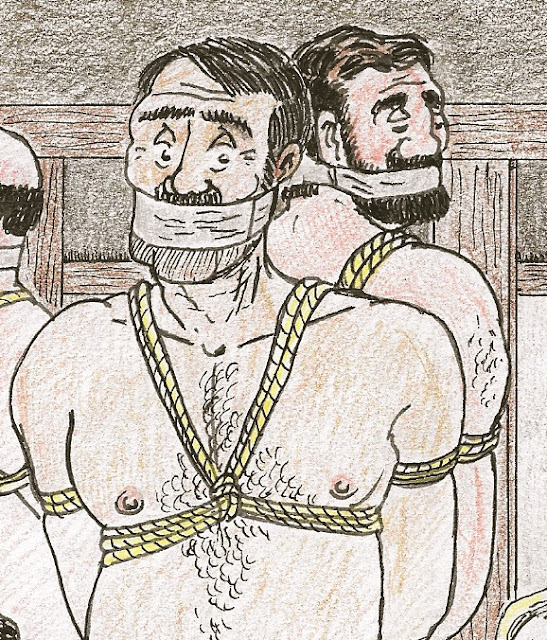 Eric wasn't too sure why he had let himself be taken to that place. Curiosity? Probably so. His friend Philip had told him so much about the "slave club" that Eric had wanted to see for himself what the place was like.

So what's it like? Well, the rest of the story and the rest of the picture is on my Patreon today. Why don't you join on the sexy, kinky, gay mature fun? It only costs $2.00 a month. 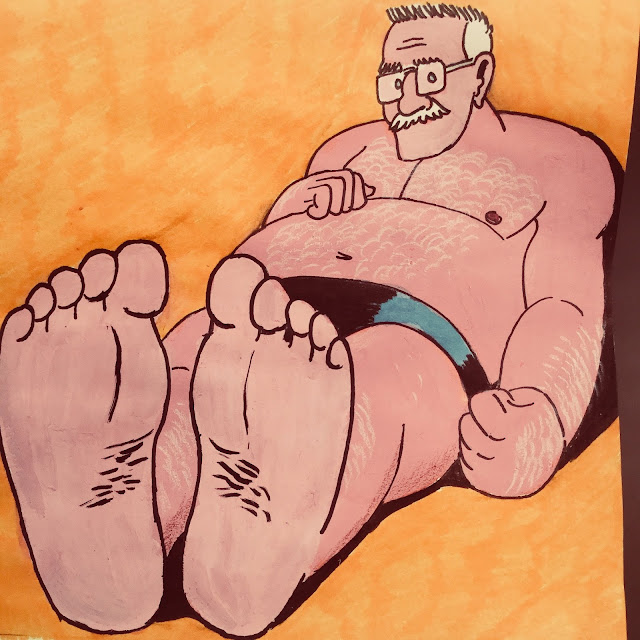 It's not often that I make images without any bondage element but then again, isn't this daddy just too adorable for words?

His Lordship Tickled on Patreon 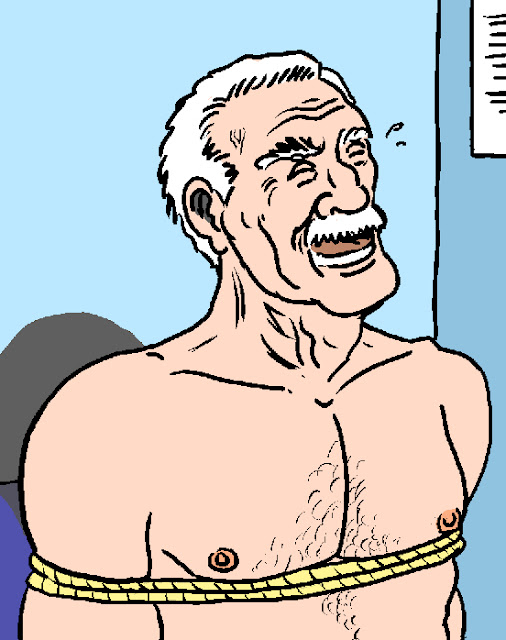 His Lordship Tickled is the new image I have posted on my Patreon for all my $2.00-a-month supporters. It's really cheap to get in on the fun!

Gramps Pays His Tab on Patreon 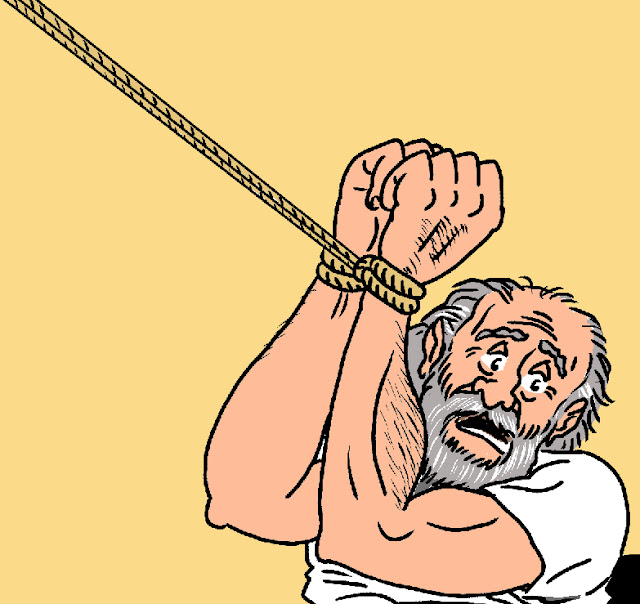 Gramps Pays His Tab, but it's NOT the way he expected. Gramps has been running quite a tab at Tony's bar. Tony has decided it was time for Gramps to pay back what he owed him. Read and see how in the new exclusive image and story on my Patreon.

Ali Bey is having a Rough Time 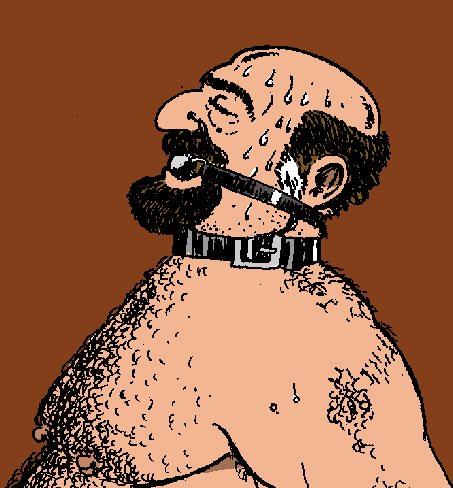 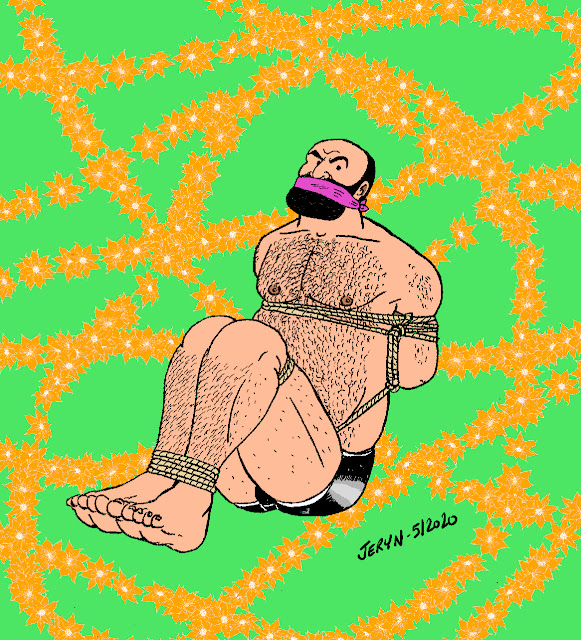 Santa in Bondage (because All Women are Bad!) 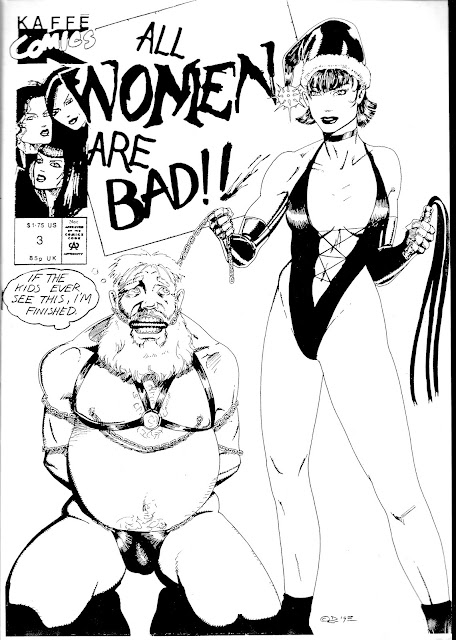 Sometimes, I will buy a comic for all the wrong reasons. This one I must have got in the UK as it's actually British, in spite of the US price being over the UK price. It was published in 1992 and to say that at the time "Good Girl" art was in vogue would be an understatement. So, this twenty-page black-and-white photocopied fanzine is mostly an excuse to run as many drawn images of women wearing skimpy attire (or sometimes no attire at all) as possible, whether in short comics or as single images. Not very likely to get my custom, then, BUT there was that cover. And honestly, who, being me, could resist that cover? And actually, artist D.Gordon, who is also the publisher, does a pretty good job of drawing Santa Claus in bondage, so he is more versatile than you'd give him credit for.

Whipping Boy For Pay on Patreon 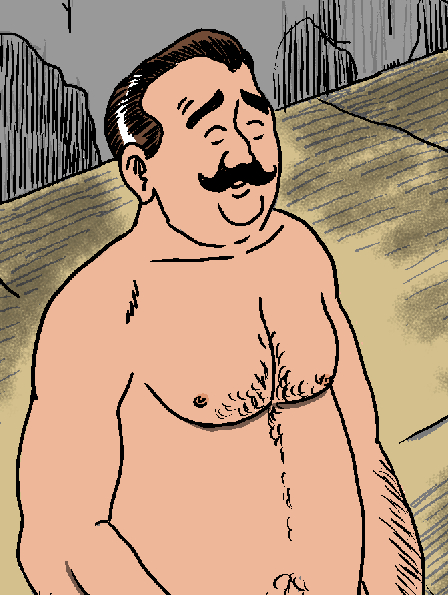 Lord H. has some very kinky habits. Retired merchant seaman Harry could tell you all about it if he wasn't bound and gagged. It's all in Whipping Boy For Pay, the new exclusive image posted for all my Patreon supporters. You too can join the fun on Patreon for only $2.00 a month.

But Is It Art? on Patreon 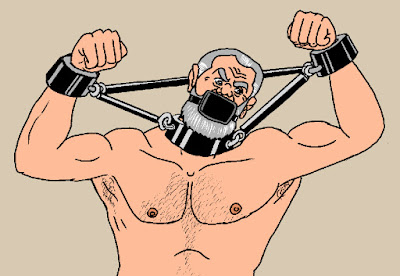 But Is It Art? That is the question my new exclusive image asks from my Patreon supporters. And it's a valid question, I think. No easy answers provided, but you can figure out your own by looking at the full picture for $2.00 a month.

A Sound Spanking on Patreon 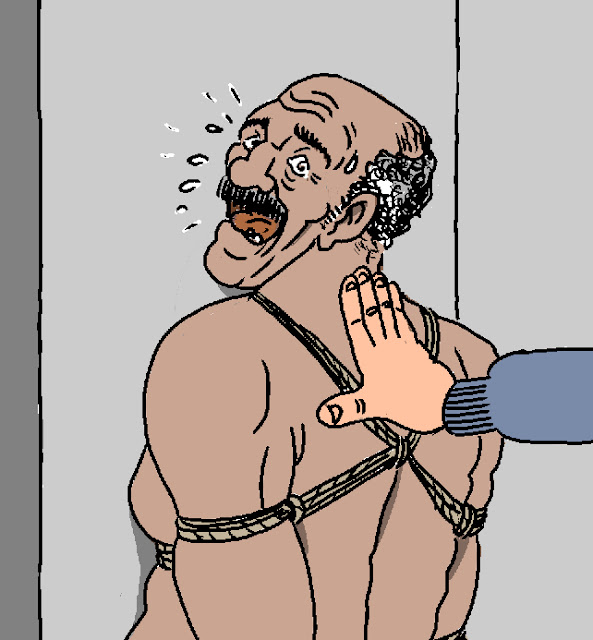 Beto had been taken to an empty room by a young man who had ordered him to strip, then had tied him hand and foot, ordering him to stand facing one of the walls. While he was tying Beto, the young man had asked him if it was his first time here, at the “punishment place”. Beto had admitted that it was.
“Well,” the young man had said, “I don’t know what you’re being punished for and I don’t want to know, but if I were you, I wouldn’t worry too much. First-time offenders usually get off easy, unless they’ve f***ed up really bad.”
The young man had tried to be reassuring, that Beto knew, but he didn’t feel reassured at all. He had “f***ed up pretty bad”, and his mistake had cost the Big Boss a lot of money and unnecessary trouble.

What's going to Happen to Beto? It's all in A Sound Spanking, the new exclusive drawing and story on my Patreon. Supporting my work on Patreon costs only $2.00 a month and gets you six exclusive drawings a month.