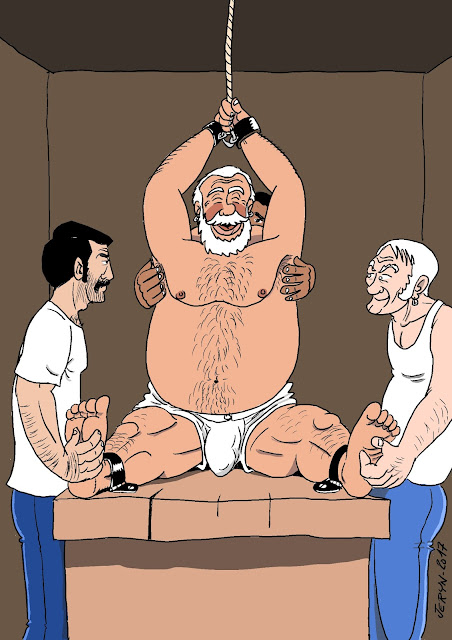 This chubby chump shouldn't have played cards with those three sharks. Now he owes them money and they're going to make damn sure he pays it back. When he understood what they had in mind for him, he boasted that he wasn't ticklish but they soon proved him wrong! 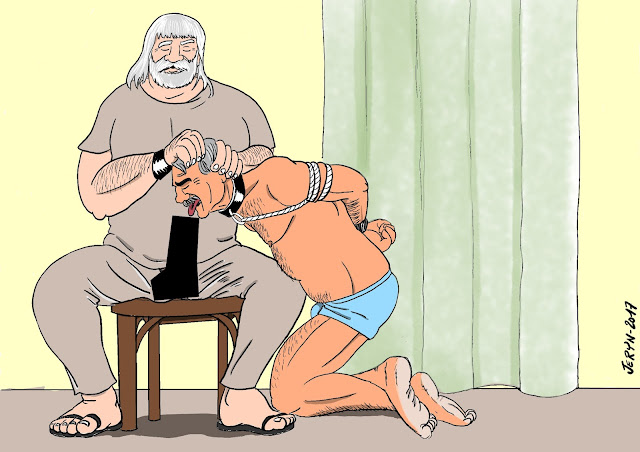 It was now one week later and it was Alfonso’s turn to submit. When he had suggested that unusual pact to Nikodemos, Alfonso knew that this would happen. Or rather, he knew that something would happen, but what? Had Nikodemos thought about what he would do to him when he had agreed? In any case, the big burly bear of a man was excited. Was he going to be content with a blow job, or would he use that big tool of his on Alfonso’s ass? At the moment, Alfonso had no time to worry about that – he had to get the big cock into his mouth, and that was enough of a challenge.

For the uncensored version of this drawing, you can go here.

Sorry - this used to be an image you could see for free on Tumblr but because of the recent change in policy, the full version is now only available on my Patreon, which costs $2.00 a month.
Posted by Jeryn at 02:14 2 comments: 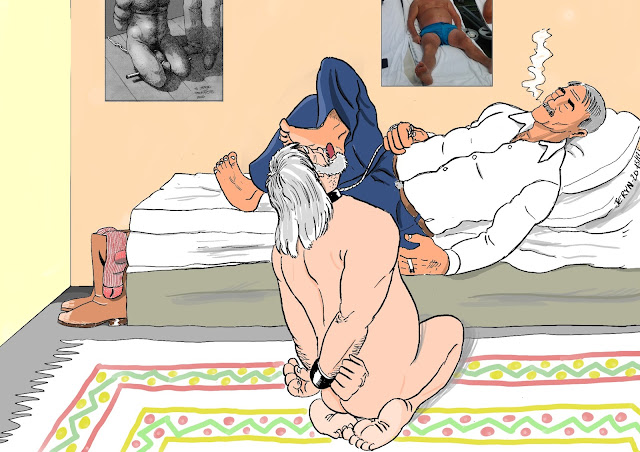 I've had that drawing in the works for a few years, now. Most of it was finished and inked in 2015, but it's only yesterday that I drew in some extra details, colored it and added the background "posters". The first poster (on the left) you already know if you follow this blog. The second one is a photo of a rather well-known celebrity, so try guessing who it is. Clues : he is a European statesman who came to prominence in the 1980s.

Another interesting detail is that until yesterday, I had always thought of the "Relaxing After Work" title as referring to the smoking guy. But then, last night, I thought that maybe both guys are relaxing after work - and maybe they switch roles every now and then. What do you think?