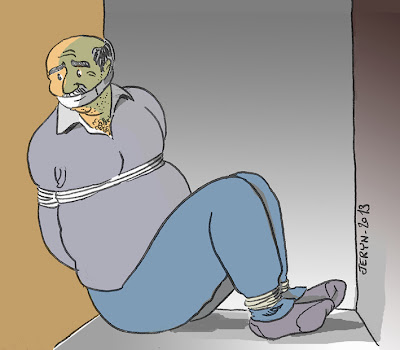 Why the title? I have no idea. I just thought this lovely chubby bound daddy could be a janitor. I wanted him bound in a broom cupboard but I was too lazy to draw a bunch of brooms so you'll just have to imagine that this is a very tidy broom cupboard from which all the brooms have been taken out (and how else could you put the janitor inside anyway?).

Sorry if the coloring is not terribly elaborate, but I've recently bought a new computer and my old version of Photoshop couldn't be installed on the new one. I'm thinking of switching to another image processing software, namely Manga Studio, since I believe it's more appropriate for the sort of things I do, that is comics and illustrations. If anybody's got any thoughts on the subject, please feel free to get in touch.

The latest news is that I have launched a tumblr site (I hesitate to call it a blog since tumblrs are basically image sites with very little writing). It is called MatureMenBoundAndGagged and I bet you can't guess what it's about. The reason why I have added the tumblr is because Jeryn's World is about my images and bondage images found in mainstream comics. I felt that photographs wouldn't fit in what is basically a pretty tame blog (by my standards, admittedly not everyone's). On the other had, tumblr can be quite raunchy, so I'll be using it to share photos I've found on the web as well as my artwork and that of other artists I find interesting.
Posted by Jeryn at 18:22 No comments:

Okay, I admit it : this time, I'm cheating. A bit. I mean, Mickey Mouse? But actually, I'm not cheating that much. There are a lot of characters getting tied up in Disney comics. Happens all the time! And of course, in the lot, there are mature and older men. Sure, those "older men" are cartoons. But so what? They are no more or less real than, say, Odin, J. Jonah Jameson or Commissioner Gordon. And sometimes, they can be damn sexy.

Such is Cloclo, a mariner who keeps telling jokes, in the story "Le Joyeux Marin !" ("The Merry Mariner") by Michel Motti (script) and Gen-Clo (art) which originally appeared in Le Journal de Mickey 1831 (July the 28th 1987). Being bound hand and foot by the bad guys doesn't faze him, probably because he can keep telling his jokes - he hasn't been gagged. Since the resolution of the good guys' predicament involves him telling a joke that makes Goofy laugh, causing one of the bad guys to fall in a sinkhole, it's a good thing he wasn't. 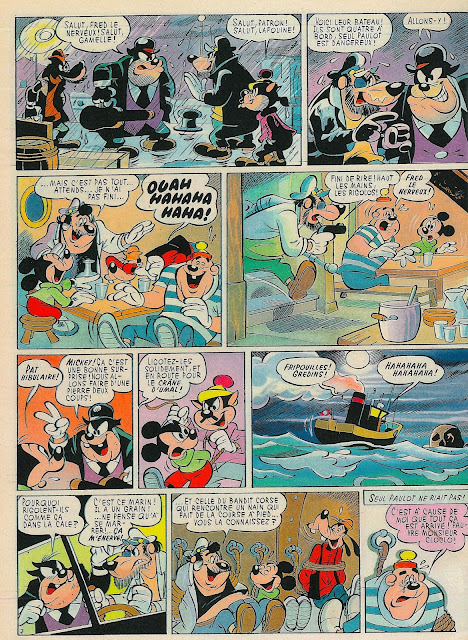 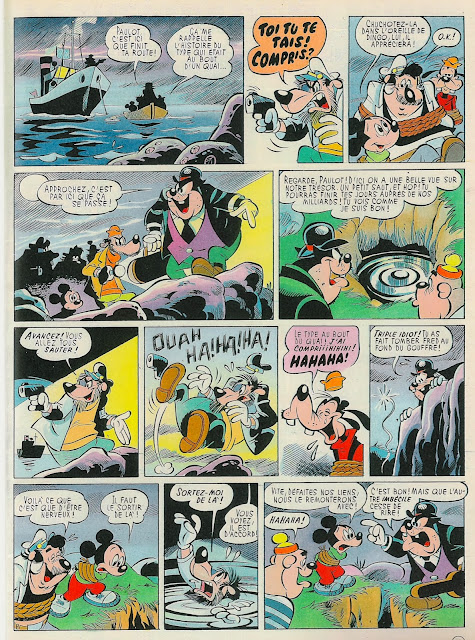 Now the funny thing - well, one of the funny things - about Cloclo, is that this one-shot character was actually based on a real person, Disney artist Claude Marin. So maybe he was a little more real than some of those characters drawn in a "realistic" art style, after all? 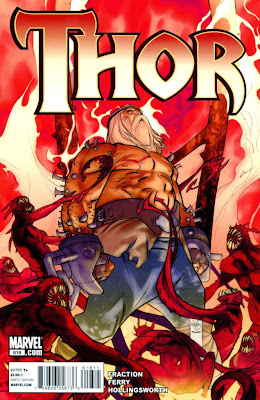 Hello, all. Long time no see, isn't it? Sorry about that. To cut a long story short, life got in the way of my drawing and blogging big time. But during those months I've been away, I've still been on the lookout for pictures of older men in bondage. And sometimes - as you know if you follow this blog - you find them in mainstream comics. This one is yet another example of almighty Odin, the all-father of the Norse gods, getting in some nasty predicament. Seems to have happened to him a bit, over the years. You'd almost think the old boy likes it.
Posted by Jeryn at 22:15 2 comments: