The Capture of El Comendador 4 on Patreon 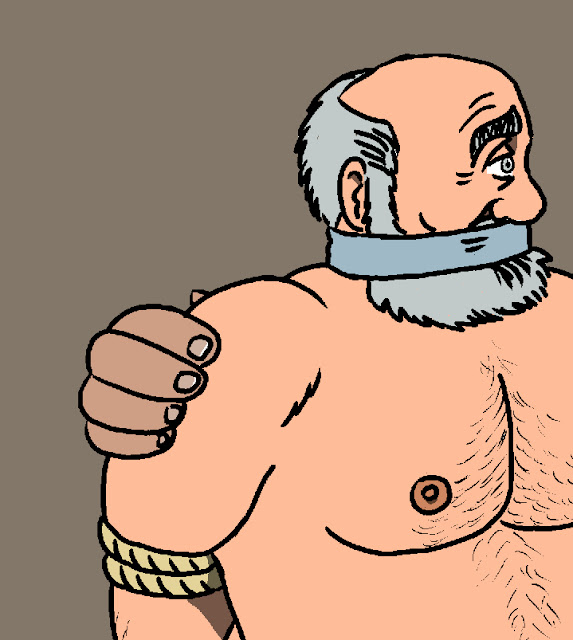 In the Capture of El Comendador 4, things are definitely getting weird for the hapless resistance chief. It's all on my Patreon as part of the exclusive drawings available to all supporters.

Capture of El Comendador 3 on Patreon 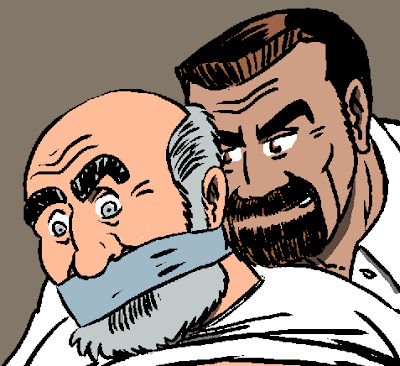 The Capture of El Comendador 3 is the newest exclusive image posted for my supporters on Patreon. Things are getting strange for the secret chief of the resistance to an oppressive regime, as the people who picked him off the street are definitely not doing what he expected they would do.
Posted by Jeryn at 23:30 No comments:

The Iron Door by Karhumies 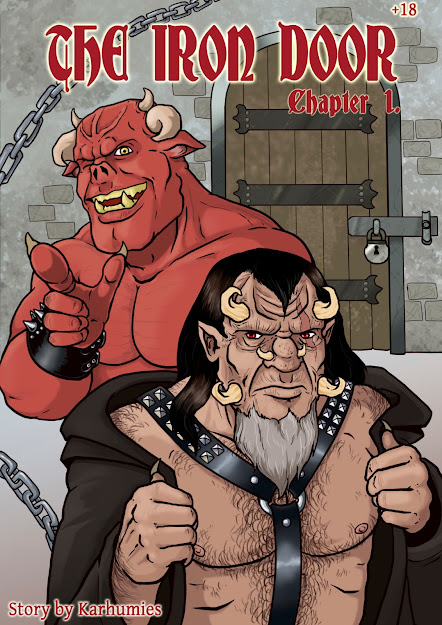 I have long been following the fetish art of Karhumies on the hentaifoundry site. So I was very happy to find out that two chapters of his comic The Iron Door are available on Gumroad as e-comics (in pdf format). Each chapter is 20 pages long with a colour cover and only costs $5.00, which is a real bargain. The story takes place in Hell and follows the adventures of mature monsterman Herttua as he gets in touch with his long-repressed sub side. It's very hot but also very human, with developed characters and just enough humour to make it a very enjoyable read. Also, who knew there were "adult" shops in Hell?
Posted by Jeryn at 17:19 No comments:

Capture of El Comendador 2 on Patreon 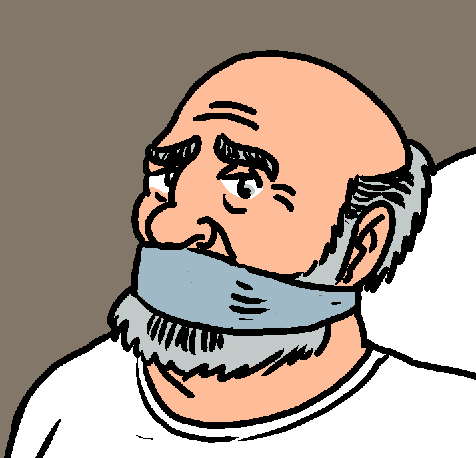 The Capture of El Comendador 2 is the new exclusive drawing just posted on my Patreon. Find out what happens next to El Comendador for just $2.00 a month.
Posted by Jeryn at 00:13 No comments:

"The Capture of El Comendador" on Patreon 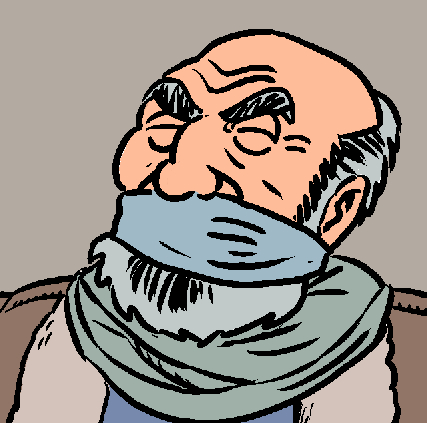 The Capture of El Comendador is the new exclusive drawing on my Patreon. Full picture available to all members.
Posted by Jeryn at 22:51 No comments:

Work in Progress (2) : Tied and Kneed 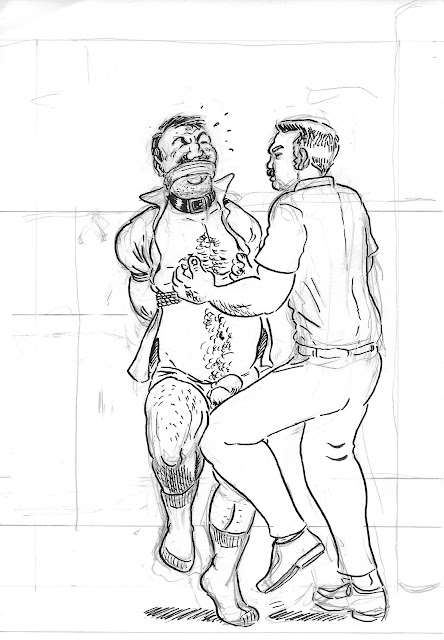 Henri is a mean little s.o.b. Now that he's got Maurice in his power, he's going to make him suffer and good.
Poor Maurice never knew Henri hated him so much during all those years they'd been working together. But he should have guessed. After all, he was never the last to make fun of Henri for his stuttering, for still not being married at his age, and many other things the guys at work found strange. Henri seemed to be taking it well, accepting to be the butt of the other workers' jokes. But inside, he was seething with rage.
And then, things started happening in both their lives. And the lives of the other workers. The plant where they all worked was bought by a company which had some unusual management methods. As soon as they were in charge, all employees sat through some tests designed to detect unused potential. It turned out that Henri had plenty of unused potential and he was sent to the company's management school. He came back a changed man, self-assured, no longer the loser sort of man his mates had known. He had been put in charge of the whole production unit, and his first job was to make it efficient again. Of course, some workers had to be "convinced" to change their ways - the ways they'd had since they first started working at the plant.
"You… You can't mean it," Maurice had said when Henri had first explained what it would take for him not to get the sack.
"Well," Henri had answered with a nasty smile, "you're not exactly a model of efficiency. There's literally dozens of young men ready to take your place if you get laid off. So you'd better do as I say."
Maurice knew his former workmate, now his chief, was right. He needed the job. Where would he find another one at his age. Reluctantly, he had to agree to Henri's conditions.
And the conditions were that each time that Maurice didn't reach his objectives for production, he would have to submit to corporal punishment. It had begun with spankings, then gone up to canings, and from there to more and more elaborate punishment. Maurice's performance had improved, but Henri's requirements had become more severe too, so poor Maurice was left to wonder when Henri would finally be satisfied with his work.
He wouldn't have liked the answer.
Posted by Jeryn at 18:33 No comments:

Farm Brothers in Charge on my Patreon 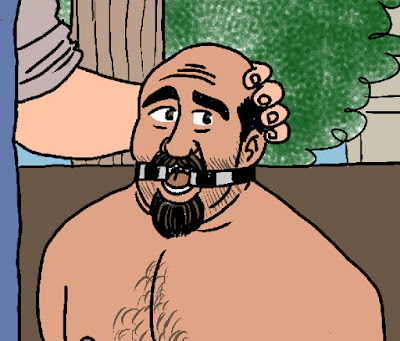 What happens when the two bachelor brothers from my October 2019 post Salesman Used want more of the same from their occasional "guests"? Well, you get Farm Brothers in Charge, the new exclusive drawing on my Patreon, the first of six I'll be posting during the month of June. At $2.00 a month, it's a real bargain!

Work in Progress (1) : Prisoner in the Manor 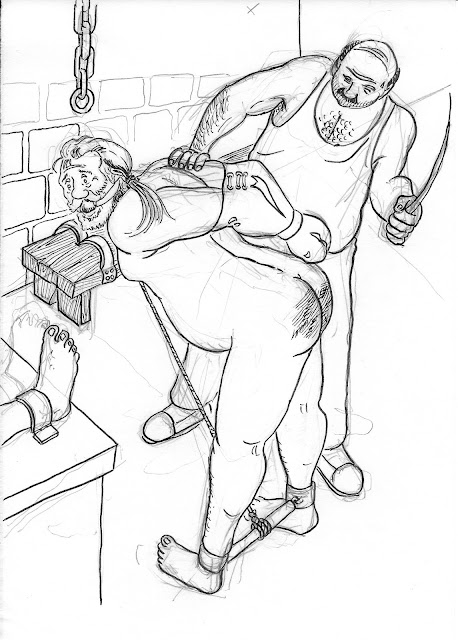 Over the years, there are a lot of drawings I have started but never finished. Or should I say, not finished yet! Every now and then, I will scan a few in view of doing finished versions. But sometimes, that too takes a long time. So here's one of those works in progress. If you'd like to see more, do not hesitate to like this post and/or post a comment.